IMPALA LAUNCHES ITS NEW CHANGEMAKER AWARD TO PROMOTE EQUITY, DIVERSITY AND INCLUSION IN THE INDEPENDENT MUSIC SECTOR WITH POWER UP AS FIRST RECIPIENT 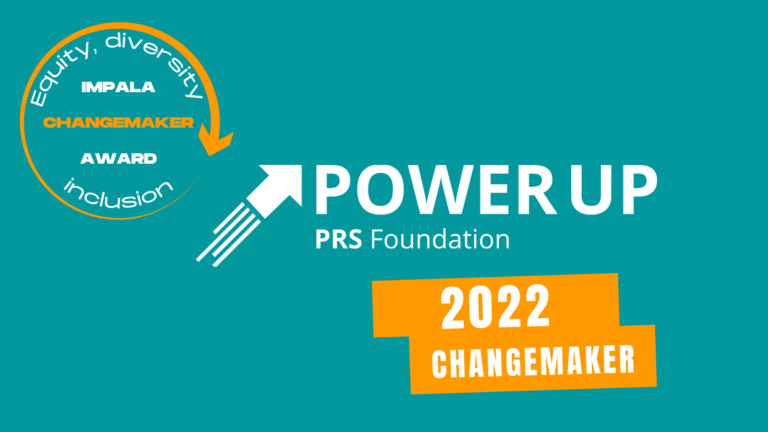 IMPALA is launching a new award scheme, known as the Changemaker Award. Part of IMPALA’s diversity and inclusion work, the award aims to put the spotlight on projects that promote change in the independent sector and inspire others to take action. It is being launched in May as part of IMPALA’s schedule for European Diversity Month.

The first recipient of this new award is the POWER UP initiative, which supports Black music creators and industry professionals and executives, as well as addressing anti-Black racism and racial disparities in the music sector. POWER UP was launched in January 2021, co-founded by PRS Foundation and Ben Wynter and managed by PRS Foundation in partnership with YouTube Music, Beggars Group, Spotify and the Black Music Coalition.

The need for a new dedicated award scheme was brought up during the very first meetings of IMPALA’s task force back in 2020, advised by Keith Harris OBE and was one of 12 commitments set out in IMPALA’s Diversity and Inclusion Charter.

Ben Wynter, Co-Founder of POWER UP, Founder of Unstoppable Music, and AIM Entrepreneur and Outreach Manager commented: “Thank you to the IMPALA Taskforce for honoring POWER UP as the first recipients of this award. I’d like to thank members of our steering group, focus groups, participants, partners and Senior POWER UP Manager Yaw Owusu, as well as Charisse at Black Lives in Music, Paulette Long, and Danny D for giving me the strength, wisdom, and support to carry on when at times the burden felt too much to bear. I would also like to shine a light on and encourage all of the other organisations and initiatives working to create a fairer and more diverse industry for all across Europe. Their work does not go unnoticed and inspires us all at POWER UP.  (continues below)”

Joe Frankland, CEO, PRS Foundation added: “It’s a real honour to be the first recipients of an award which celebrates changemaking initiatives in a way we hope inspires the independent sector to go further to actively combat discrimination. Since launching our programme for Black music creators and industry professionals in the UK, we have received almost 1,000 applications and over £10m in support has been requested. Demand for a fairer and equitable music industry from those hitting glass ceilings and experiencing racial barriers is undeniable. The POWER UP participants are creating a powerful network and prove that everyone benefits from this targeted, changemaking approach. (continues below)”

Eva Karman Reinhold, SOM’s CEO, IMPALA Equity, Diversity and Inclusion task force’s co-chair commented: “This new award is one of our charter’s commitments and I’m really happy we’re launching it. Real change takes time, also in the music industry, and this is not a one-off. We’re still working on equity, diversity and inclusion with IMPALA’s task force and this award will take place yearly. POWER UP is a great initiative, and we also take this opportunity to highlight others by launching a new changemakers webpage.”

Keith Harris OBE, adviser of IMPALA’s Equity Diversity and Inclusion task force continued: “I am impressed by the work POWER UP has done in past two years and I’m pleased that they are committed to building better long-term support and infra-structure for Black creators and professionals in the music industry.”

Helen Smith, IMPALA’s Executive Chair commented: “We’re delighted to see POWER UP as first recipient of IMPALA’s Changemaker Award. Our new award scheme is the perfect opportunity to highlight the great work they’re doing. We hope this will help our members to get inspired and take action locally.  We encourage the music sector in each country to have their own POWER UP scheme.”

Paul Pacifico, AIM’s CEO and IMPALA Equity, Diversity and Inclusion task force’s co-chair added: “POWER UP has shown that impactful programmes can start to have significant effects in a short timeframe.  It would be amazing to see other initiatives inspired by their approach develop in other European countries and this award is well deserved. It’s great to share best practices and there is much to learn from all of the ones IMPALA is featuring. I’m also very pleased to see Women In CTRL on the list, founded by Nadia Khan, AIM’s Chair.”

Joe Frankland continued: “We are grateful to the many partners who believed in the initiative help to drive things forward. And I would like to thank Ben, Yaw and other inspiring Executive Steering Committee members, plus the dozens of Black music creators and professionals who helped to shape and steer the initiative from the beginning.

Meaningful and lasting change requires support from several partners, and we welcome further collaboration across the independent sector.”

Ben Wynter concluded: “POWER UP was created to move the needle on anti-Black behaviour within the music industry and to facilitate better dialogue for those companies who posted black squares, wanted to do better but didn’t know how to, whilst breaking down the unspoken barriers that often exist between their organisations and the Black music community.

Despite pushback from some in the industry, the first year proved to be an overwhelming success and we’re proud to bring together partners to bring about much needed change. We want to see more people actively engaging and collaborating with us so POWER UP can light their path as they take steps in the right direction towards authentic engagement and understanding of the Black music community and anti-Black racism. The data coming out of POWER UP justify what we already knew that a glass ceiling DOES exist and that equipping underrepresented talent with the tools to dismantle that ceiling works.

Awards such as these are always bittersweet, as we would all like to work in an industry where an award like this isn’t needed. The journey has been mentally, emotionally and physically exhausting and this award is a much-needed shot in the arm to encourage all associated with POWER UP to keep going, and to keep the conversation around actively combatting anti-Black racism going.”

More about POWER UP
POWER UP is an ambitious, long-term initiative which addresses anti-Black racism and racial disparities in the music sector, and supports Black music creators and industry professionals and executives through bursaries and capacity building activities.
Co-founded by PRS Foundation and Ben Wynter and managed by PRS Foundation in partnership with YouTube Music, Beggars Group, Spotify and the Black Music Coalition, the POWER UP initiative was set up to break down barriers and to create a fairer, more equitable music industry, to achieve better representation in all sectors of the UK music industry. And a holistic Participant Programme supports an annual cohort of 40 Black music creators and industry professionals. The programme has already powered up award-winning talent and those who are dominating playlists and line-ups and are taking up senior roles and Board positions across the industry.
More info here.

More about IMPALA’s Changemaker Award
This award puts the spotlight on projects which champion work on equity, diversity and inclusion. It’s part of IMPALA’ charter commitments and will be selected yearly by IMPALA’s task force. Launched in May 2022, the award will highlight projects that have an impact on the independent music sector in terms of making change happen and inspiring others to take action. It takes place yearly during European Diversity Month. Check our changemakers webpage on winners and other projects, to get inspired and take action.
More info on the award here.

More about IMPALA
IMPALA was established in 2000 and now represents nearly 6000 independent music companies. 99% of Europe’s music companies are small, micro and medium businesses and self-releasing artists. Known as the independents, they are world leaders in terms of innovation and discovering new music and artists – they produce more than 80% of all new releases and account for 80% of the sector’s jobs. IMPALA’s mission is to grow the independent music sector sustainably, return more value to artists, promote diversity and entrepreneurship, improve political access, inspire change, and increase access to finance.
More info here.