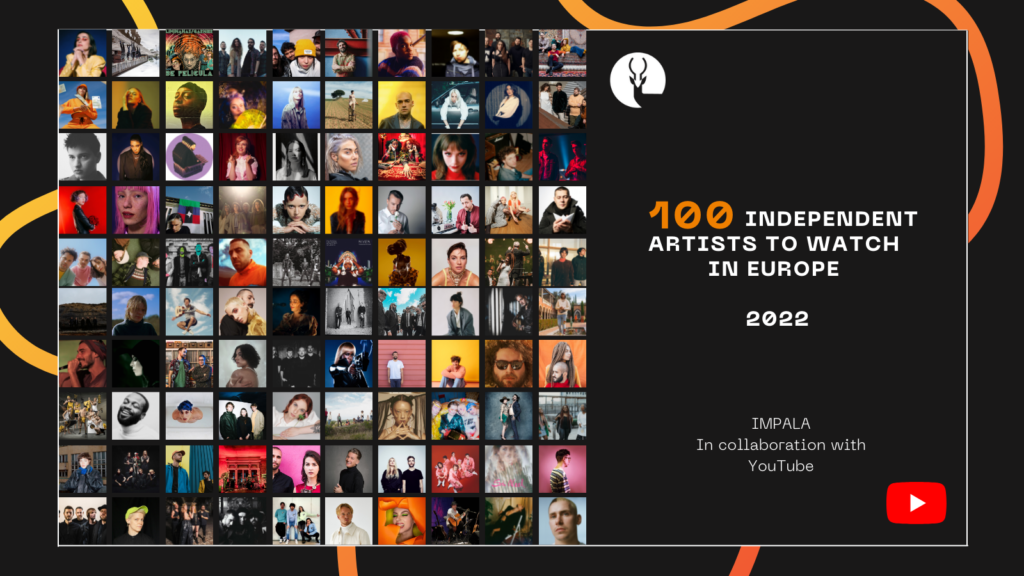 IMPALA is launching a new programme to boost diversity in the European independent music sector in partnership with YouTube. “100 Artists to Watch” will put the spotlight on key independent artists across Europe. A new set of participating artists will be announced each Spring. This new programme replaces IMPALA’s annual European Independent Album of the Year Award, which had a great roll of 10 years.

Curated by IMPALA’s members and its broader network, 100 Artists to Watch is designed to highlight artists at different stages in their career. Members are free to propose artists based on various factors such as diversity and innovation, as well as commercial success.

IMPALA’s very first list includes artists from 30 different countries and features more than 30 music genres, from Blues-Stoner to Hip-Hop, Jazz to Dance, Hyperpop to Alternative Rock… 100 great European independent artists to look out for this year. Hit play to embark on an amazing musical journey here and discover the complete list of artists below.

Helen Smith, Executive Chair, IMPALA commented: “IMPALA’s remit is to boost diversity across Europe, so it’s great to be introducing this new programme with YouTube. The idea is to help shine a light on the range of talent the independent sector works with in Europe.”

Dan Chalmers from YouTube added: “The independent sector is a key partner for YouTube and we are really excited about our collaboration with IMPALA on 100 Artists to Watch in Europe. YouTube gives creators and artists a platform to reach the world and enables them to get noticed across borders”.

Read more about these artists on our dedicated webpage here.

Listen to them here (all 100) or check out our genre playlists instead:

YouTube partnering up with the independents
YouTube will work with IMPALA on its 100 Artists to Watch programme to help build awareness of the diverse European independent sector. YouTube will help the independent community by spotlighting talent from different markets and at different stages in their career. Promoting diversity is a priority for YouTube, encouraging music fans to discover artists they might never find otherwise. Further support may include marketing and promotion for a shortlist of artists later in the year.

More about IMPALA
IMPALA was established in 2000 and now represents nearly 6000 independent music companies. 99% of Europe’s music companies are small, micro and medium businesses and self-releasing artists. Known as the independents, they are world leaders in terms of innovation and discovering new music and artists – they produce more than 80% of all new releases and account for 80% of the sector’s jobs. IMPALA’s mission is to grow the independent music sector sustainably, return more value to artists, promote diversity and entrepreneurship, improve political access, inspire change, and increase access to finance.

More about “100 Artists to Watch”
The 100 Artists to Watch award was launched in 2022 to promote diversity in the European independent music sector. The project puts the spotlight on a more diverse range of amazing artists through a list curated by our members all across Europe. It is a natural evolution of IMPALA’s album of the year award which ran for ten years.

Check out our dedicated webpage here with a card on each artist.

More about YouTube
Launched in May 2005, YouTube’s mission is to give everyone a voice and show them the world. We believe that everyone deserves to have a voice, and that the world is a better place when we listen, share and build community through our stories. YouTube is a Google company.
More here.