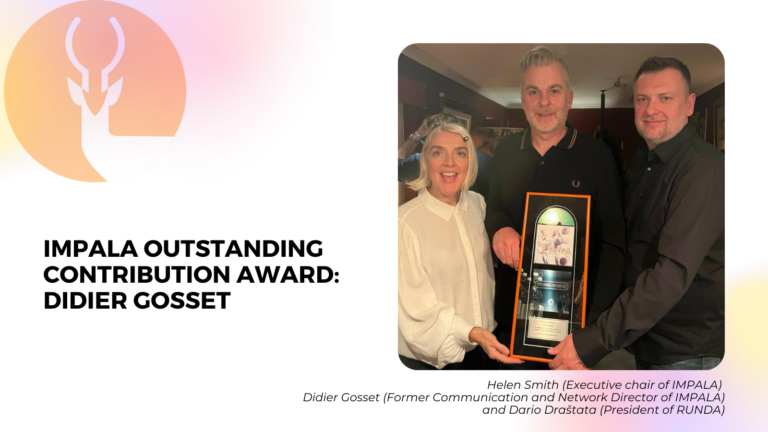 Didier’s work as Communication and Network Director has been crucial in expanding the IMPALA membership’s breadth to over 30 countries today. He played a key role in developing the sector’s network development in Central and Eastern Europe in particular. Didier’s collaboration across the region led to RUNDA (Regional Association of Independent Discographers) being set up. Along with local partners, Didier worked tirelessly to help boosting RUNDA’s membership in the seven ex-Yugoslavia territories.

During his 14-year tenure at IMPALA, Didier also worked on other key areas, such as touring and finance as well as IMPALA’s partnership programme Friends of IMPALA.  Didier also had a key role in the ground-breaking divestment process pioneered by IMPALA and Merlin with Warner Music Group. IMPALA’s trade fairs’ network grew exponentially during his tenure, creating new export opportunities for the independent sector.

Outside of IMPALA, Didier’s passion for innovative musical talent led him to co-found his own record label Black Basset Records  in 2013, which will continue to be a member of IMPALA through Belgian indie association member BIMA.  In addition, his role as a representative for the Fédération des Festivals de Musique Wallonie-Bruxelles contributes to a professional festival sector accommodating both independents and their artists.

Didier’s next chapter is in his hometown of Charleroi, Belgium where he takes over the management of local concert venue and cultural platform known as Le Vecteur. This will create and promote fruitful opportunities for musical participation and engagement within the region. IMPALA members joined Didier at Reeperbahn to wish him the best of luck as he sets off on this exciting mission. The members also approved a restructuring of the IMPALA secretariat which will be announced in due course.

Helen Smith (Executive Chair of IMPALA), commented: “Throughout his time at IMPALA, Didier’s commitment and personal touch has been exceptional. He transformed our network development work in Central and Eastern Europe and his collaborative style was recognised by all our members.  We look forward to seeing how Le Vecteur’s work will evolve with Didier at the helm – more gigs for the IMPALA team to go to!”.

Dario Draštata (President of RUNDA) expressed: “It’s really difficult to sum up in just few sentences all the good work Didier has given to independent community during his years with IMPALA.  But maybe the successful founding of RUNDA as first regional indie labels association under IMPALA’s umbrella is a great illustration of his highly professional skills, effortless energy and friendly, sincere approach, that always made the difference. We are truly grateful for all he did for us and although we know it wasn’t easy sometimes, he always had our back.  With mixed emotions on his leaving of IMPALA, we wish him even more success in this new chapter of his professional life”.

Didier Gosset (Former Communication and Network Director of IMPALA) added: “Putting an end to 14 years working for the indie community was never going to be an easy decision. I am proud to say that I will be leaving more friends than colleagues at IMPALA and that I have had the chance to meet and work with countless inspiring figures over the years.  The music landscape has hugely changed during my time with the association but, despite facing countless challenges, the indies have always managed to remain at the forefront.  I am hoping to be able to take just a tiny part of this spirit of innovation and adaptability with me in my new adventure in the Belgian black country.”

IMPALA was established in 2000 and now represents nearly 6000 independent music companies. 99% of Europe’s music companies are small, micro and medium businesses and self-releasing artists. Known as the independents, they are world leaders in terms of innovation and discovering new music and artists – they produce more than 80% of all new releases and account for 80% of the sector’s jobs. IMPALA’s mission is to grow the independent music sector sustainably, return more value to artists, promote diversity and entrepreneurship, improve political access, inspire change, and increase access to finance. IMPALA works on a range of key issues for its members, runs various award schemes and has a programme aimed at businesses who want to develop a strategic relationship with the independent sector – Friends of IMPALA.