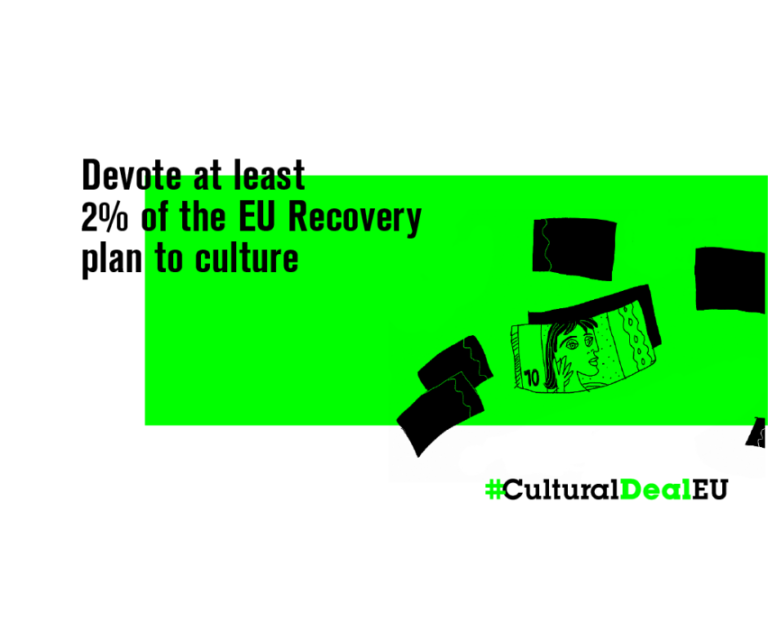 IMPALA is among more than 110 signatories of the following letter addressed to EU leaders.

As a powerful vector for the future of Europe and a key asset for the continent’s social, environmental, and economic sustainability, culture is more than a sector that needs urgent support. Culture is key to healing wounds in times of crisis, to keeping our societies together, and to making them more resilient. For these reasons, we believe it should be at the heart of Europe’s recovery from the pandemic.

Ensuring that culture is explicitly included in the National Recovery and Resilience Plans (NRRPs) will help secure both the future of the sector and its important contribution to Europe’s future.

Following the formal adoption of the regulation establishing the Recovery and Resilience Facility (RRF) in February and the rollout of the vaccination campaign across Europe, the EU is readying itself to reopen and recover. The European cultural community, however, cannot share the enthusiasm, for we do not yet see the light at the end of the tunnel.

Only one other sector – air transport – has suffered the same economic impact as the cultural and creative sectors, which experienced a 31% drop in turnover in 2020 (in some sub-sectors up to 90%), more than tourism and the automotive industry. (EY, “Rebuilding Europe. The cultural and creative economy before and after the COVID-19 crisis”, January 2021).

With cultural activities still halted, cultural venues and heritage sites remaining closed, cross-border cultural exchanges stalled, millions of jobs frozen or wiped out, and many talents forced to leave the sector, 2021 promises to be another trying year.

We, 110+ representatives of the multifaceted European cultural ecosystem, call on the Member States and the European Commission to secure a future for culture and cultural life in Europe. One year after the breakout of the pandemic, we have the opportunity to carefully evaluate safe reopenings
and a potential first step in the sector’s recovery.

We ask the Member States to reactivate cultural life in Europe, while keeping existing and putting in place new dedicated support schemes far beyond stabilisation of the situation. This will help rebuild confidence of both cultural communities and citizens, ensure a smooth resumption of activities and offer hope to the millions of Europeans whose lives have become barren, devoid of cultural and social connection.

Crucially, by now, the majority of EU countries have presented the drafts of their National Recovery and Resilience Plans (NRRPs) to the European Commission, starting a time of informal dialogue and exchanges in the weeks to come, before the formal deadline of 30 April.

This is a key moment to fine-tune and validate those plans.

• We reiterate our call made on 30 October 2020 and urge the EU and its Member States to fully include culture in each and every National Recovery and Resilience Plan (NRRP), and dedicate, at the very least, 2% of the RRF envelope for culture. We have seen strong political will, as expressed among others by the European Parliament, to put culture as a priority sector when using funds from Next Generation EU. It is now time to translate this commitment in the NRRPs.

• In addition, we call on the Member States to continuously involve and engage the representatives of their cultural communities and civil society organisations in the design and implementation of the NRRPs, as indicated in the European Commission guidelines for the preparation of the national recovery and resilience plans. Long-term structural support to rebuild the European cultural ecosystem needs to be co-developed, involving all relevant stakeholders, both public and private.

Reinvigorating the cultural ecosystem not only offers hope to millions of workers who saw their jobs eradicated or endangered by the pandemic, it can offer new meaning and purpose to all Europeans and the European project.

Let us put culture at the heart of Europe’s recovery.