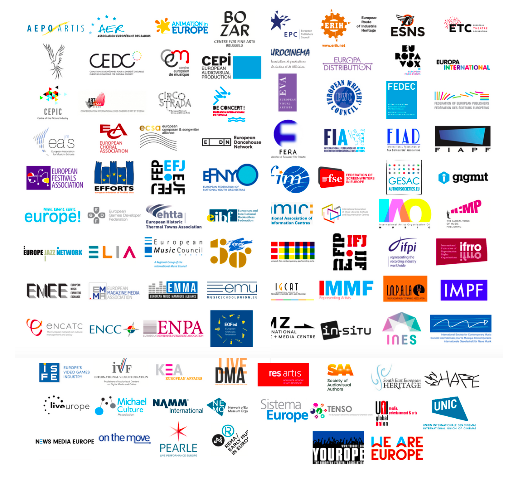 On 19 June, EU leaders will meet in Brussels to discuss the Commission’s proposed recovery fund and EU long-term budget.

Ahead of this meeting, 94 organisations representing the whole spectrum of Europe’s cultural and creative sector have issued a joint call for strong and systemic support measures at EU and national level to recover from the crisis.

Together, they call on Member States and the European Parliament:

As far as the cultural and creative sector is concerned, the picture presented in the EU’s recovery plan is uncertain. Culture is rightly mentioned as one of 14 priority sectors hit hardest by the crisis, with an estimated 80% drop in turnover for some parts of the sector. However, guarantees are needed to ensure an appropriate share of the recovery budget will reach the sector’s creators, professionals and businesses.

In addition, the proposed budget for the only EU’s programme providing direct support to culture, Creative Europe, is being cut to €1.5bn. Although it’s a step up from the current programme, it is a substantial decrease compared to the €1.85bn (€1.6bn in constant prices) the commission proposed for the same programme back in 2018, and a far cry from the European parliament’s proposed €2.8bn.

IMPALA’s Executive Chair Helen Smith said: “A number of programmes and instruments which cultural and creative SMEs can in principle benefit from in the recovery plan are being introduced or seeing an increase. We need to see how exactly the sector is being prioritised as we have been hearing from the commission. Clarification and guarantees are needed.”

Helen Smith added: “The commission’s announcement regarding Creative Europe is a missed opportunity. Together with the whole sector, we now call on the European parliament and member states to push for this programme to be increased to a level that is on par with the sector’s contribution to the EU’s economy and wellbeing.”

At the end of April, IMPALA published a proposal for a recovery roadmap, forming the basis of a 5-year recovery strategy focussing on boosting investment, growth and jobs through Europe’s cultural and creative sectors.

The letter is available here and was signed by the following organisations: Joint sector call – Investing in Europe’s next generation by investing in culture_99 signatories.pdf

9. CEPIC – Centre of the Picture Industry

18.EFJ – The European Federation of Journalists

54.FSE – Federation of Screenwriters in Europe

55.GESAC – European Grouping of Societies of Authors and Composers

72.ISCM – International Society for Contemporary Music on behalf of the