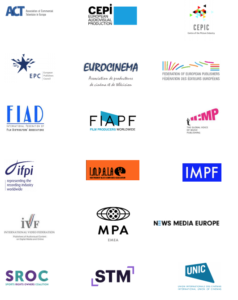 IMPALA joins 17 rightholder organisations in raising concerns with part of the European commission guidance on article 17 of the copyright directive and asking member states to stay faithful to the text of the directive.

You can find the letter below and a pdf version is also available here.

We are representatives of a broad group of right holders in Europe’s creative sectors, including book, press, musical, scientific, technical and medical publishers; the recorded and published music industries; film, animation and TV producers; sporting event organisers; TV and radio broadcasters; distributors; publishers of film and AV content on physical media and online; and photo agencies. We are concerned that the European Commission’s Guidance on Article 17, issued on 4th June 2021, moves away from that achievement, as well as from the original objective and wording of Article 17.

Article 17 of the DSM Copyright Directive is the result of long political negotiations, involving all three EU co-legislators, and rests on a delicate balance between the interests of rightholders, users, and online content sharing service providers.

We are concerned that the European Commission’s Guidance on Article 17, issued on 4th June 2021, moves away from that achievement, as well as from the original objective and wording of Article 17.

As set out throughout the consultation process, we stress our concern about the artificial and impractical construct of “manifestly infringing” and not “manifestly infringing” uses, which have no foundation in the Directive or the EU acquis. However, we note the Guidance’s confirmation that Member States should not legislate on this construct, but that right holders and OCSSPs should “progressively fine-tune” their cooperation to accommodate legitimate uses.

We ask the Member States to continue to be guided by the text of the Directive as adopted after several years of negotiations and to ensure a faithful implementation that would ensure the necessary balance between all fundamental rights and legitimate interests at stake. It is imperative that right holders’ fundamental right to property remains protected, and for them to be able to secure a fair return for their efforts, in order to continue to contribute to the rich cultural diversity which defines the European Union.

ACT – represents leading commercial broadcasters active across the European Union and globally. The ACT member companies finance, produce, promote and distribute content and services benefiting millions of Europeans across all platforms. At ACT we believe that the healthy and sustainable commercial broadcasting sector has an important role to play in the European economy, society and culture.

CEPI TV – The European Coordination of Independent Producers was founded in 1990 to organise and represent the interests of independent cinema and television producers in Europe. It represents approximately 8000 independent production companies in Europe. CEPIC – As the Center of the Picture Industry, CEPIC federates 600 picture agencies and photo libraries in 20 countries across Europe, both within and outside the European Union. CEPIC’s membership includes large and smaller stock photo libraries, major photo news agencies, art galleries and museums, video companies.

EPC – The European Publishers Council brings together Chairmen and CEOs of Europe’s leading media groups representing companies with newspapers, magazines, online publishing, journals, databases, books and broadcasting, communicating with Europe’s legislators on issues that affect freedom of expression, media diversity, democracy and the health and viability of media in the EU.

FEP – The Federation of European Publishers represents 29 national books and learned journals publishers’ associations of the European Union and the European Economic Area.

FIAD – The International Federation of Film Distributors’ Associations gathers national organisations of film distribution companies covering the entire range of companies: small and medium-sized companies specialized in art house films, as well as larger companies focused on mainstream films. FIAD’s members operate in 14 countries where they cover 90 to 100 percent of the theatrical market.

FIAPF – FIAPF’s members are 36 film and TV producer organizations from 29 countries, including 15 in the EU/EEA. Their activities include the development and production of films and audiovisual content which are distributed offline and online via all forms of authorised and legal online distribution channels.

ICMP – is the world trade association for music publishers and companies. We represent more than 90% of the world’s published music. Our membership comprises 61 national associations, including each of the 27 EU Member States.

IFPI – IFPI is the organisation that promotes the interests of the international recording industry worldwide. IFPI and its National Group network has over 8,000 members across more than 70 countries. There are over 70 IFPI offices, National Groups and Affiliated MLCs. IFPI’s mission is to promote the value of recorded music, campaign for the rights of record producers and expand the commercial uses of recorded music in all markets where its members operate.

IMPALA – IMPALA is the European association of independent music companies, representing over 5,000 music SMEs. Its mission is to grow the independent music sector, return more value to artists, promote cultural diversity and entrepreneurship, improve political access and modernise perceptions of the music sector.

IVF – The members of the International Video Federation are associations representing businesses active in all segments of the film and audiovisual sector in Europe. Their activities include the development, production, and distribution of films and audiovisual content as well as their publication on digital physical carriers and via all forms of authorised and legal online distribution channels (TVOD, SVOD, AVOD).

MPA – The Motion Picture Association is the leading advocate of the film, television, and streaming industry around the world.

NME – News Media Europe, the voice of the progressive news media industry in Europe, representing over 2400 news brands, online and in print, on radio and TV.

SROC – The Sports Rights Owners Coalition is a forum of over 50 international and national sports bodies and competition organisers, with a particular focus on rights issues.