SUPPORT IN THE EUROPEAN PARLIAMENT FOR A EU MUSIC PROGRAMME

Representing 1,2 million jobs, the European music industry is growing at a fast pace and holds untapped potential that can be optimized through a tailor-made funding programme at EU level.

In the context of the Music Moves Europe initiative, since late 2015, the European Commission has held intense discussion on the challenges of the sector, with various representatives of the music ecosystem.

A momentum to inject positive messages into the EU rationale

MEP Christian Ehler opened the event underlining the joint effort by the EU Institutions to elaborate a Preparatory Action and outlining the directions it could take. ‘This is the right time to push music forward for the new generations’ he stated.

‘We need to acknowledge the real concerns of EU citizens. Music can be a part of the agenda to address economic and societal changes in Europe’, added Martine Reicherts, Director General of DG EAC at the European Commission.

‘Because music brings people together, these kind of initiatives could provide a more friendly view of EU institutions’ continued MEP Javi Lopez. ‘Music is interested in Europe, but Europe should be even more interested in music.’

‘The music sector is the canary in the coal mine. It was the first to be impacted by the digital shift but also the first one to adapt’ recalled Matthieu Philibert of IMPALA, the independent music companies association. ‘Right now the music sector is under financed and a dedicated support would give the industry a welcome boost’.

‘The Preparatory Action currently discussed in the CULT Committee is a great test before moving to a larger programme’ underlined Fabien Miclet of Liveurope, a EU-funded platform for live music venues. ‘This pilot phase can give us the means to map the European music sector as a whole and evaluate our impact on the entire continent’.

MEP Bogdan Wenta, who tabled the Preparatory Action asserted: ‘we can be very proud of the work we’ve achieved so far as such an initiative could benefit to music stakeholders across the spectrum’.

‘This is not only about the symbol, it’s a strategy that we can impulse altogether’ concluded MEP Pervenche Berès. ‘In just a few days, the CULT Committee will vote on the preparatory action, but the vote in the BUDG committee in September is the real stake here.’ 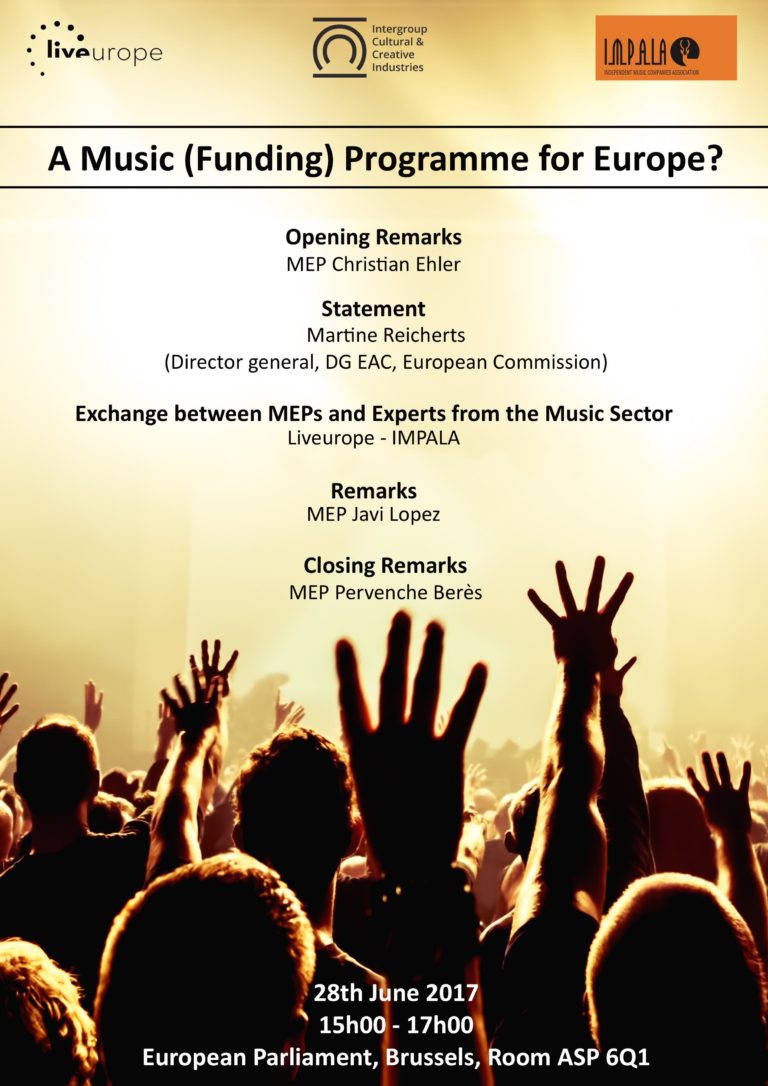