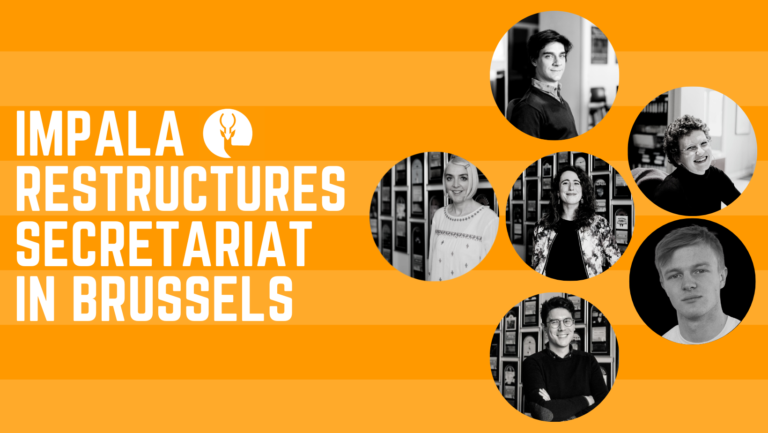 This Autumn, IMPALA announces the promotion of key employees and redistribution of roles as well as the appointment of Rory Brown as Communication and Project Assistant. This is part of the association’s restructuring following the departure of Didier Gosset and the organisation’s move to a new office earlier this year.

The team will work alongside Helen Smith as Executive Chair and is joined by Rory Brown to boost the association’s communication strategy and raise visibility. He will also lead on IMPALA’s awards and work on specific projects such as touring. Originally from the UK, Rory moved to the Netherlands in 2015 and then to Belgium in 2020. He is an expert on EU cultural policy and communications.

“As we settle into a new rhythm, our re-structure and relocation puts our team`s fresh edge to its best advantage to deliver and be dynamic. Independent music businesses are the lynchpin of the music ecosystem and it is a privilege to champion their cause”.

The full IMPALA team is:

IMPALA’s new office in Brussels is in the heart European quarter, sharing with other structures including KEA European Affairs who ran the very first IMPALA secretariat 20 years ago.

The restructuring was approved at IMPALA’s annual meeting during this year’s Reeperbahn festival in September. IMPALA members also set new priorities, to be announced shortly. At the AGM, Didier Gosset’s tenure at IMPALA was recognised with the association’s prestigious Outstanding Contribution Award.  Didier is now managing the venue Le Vecteur in his home town Charleroi.

IMPALA was established in 2000 and now represents nearly 6000 independent music companies. 99% of Europe’s music companies are small, micro and medium businesses and self-releasing artists. Known as the independents, they are world leaders in terms of innovation and discovering new music and artists – they produce more than 80% of all new releases and account for 80% of the sector’s jobs. IMPALA’s mission is to grow the independent music sector sustainably, return more value to artists, promote diversity and entrepreneurship, improve political access, inspire change, and increase access to finance. IMPALA works on a range of key issues for its members, runs various award schemes and has a programme aimed at businesses who want to develop a strategic relationship with the independent sector – Friends of IMPALA.