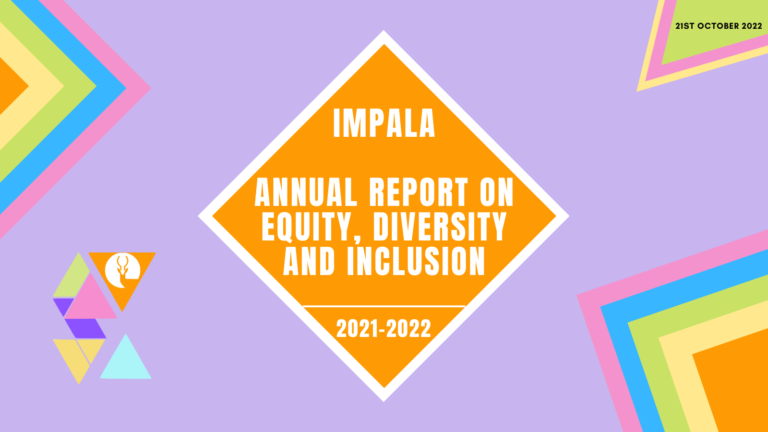 On the second anniversary of its equity, diversity and inclusion charter, IMPALA is releasing today its annual report on the work done over the past 12 months, focussing on successful projects and campaigns, as well as areas which still need to be improved.

For the second year, IMPALA’s Equity, Diversity and Inclusion task force continued to implement the 12 commitments from the organisation’s charter adopted on 21 October 2020. The year was packed, from the release of the report on IMPALA’s first diversity survey providing a snapshot of the sector, to the review of our awards schemes, bringing two new concepts to life: Artists to Watch and Changemaker Award.

IMPALA continued its free training programme for members and gave a platform to special guests who advocate for equity, diversity and inclusion in the music industry on the 20MinutesWith podcast series. IMPALA’s report also flags its ongoing work on equity in streaming and remuneration, with a section focussed on how to cut the digital pie equitably, including the insight of Ben Wynter on how streaming has been a game changer and why he doesn’t support so-called “equitable remuneration”.

Keith Harris OBE, adviser to IMPALA’s equity, diversity and inclusion task force commented: “IMPALA has shown that it was not just making a fashionable gesture when it committed to striving for long term change in terms of equality and diversity. The new report makes for interesting reading and shows that the Independent sector across Europe is prepared to invest significant time and effort to bring about long term and meaningful change to improve fairness and equity. The spirit of cooperation and the willingness to share best practice and learn from each other’s experiences has really been commendable and little by little Equality Diversity and Inclusion is moving to centre stage, and is manifestly becoming central to the thinking of the opinion formers and decision makers across the Industry. The training sessions have been a very welcome addition to the landscape, and the introduction of the Changemaker Award is a great way to give recognition to the best efforts made to that end.”

Paul Pacifico, CEO of AIM (UK), Co-chair of IMPALA’s equity, diversity and inclusion task force:“Finding out where members actually sit on diversity and inclusion issues is key to IMPALA’s task force. We want to be able to assess our starting point, so that we can properly measure progress going forward, which is why carrying out the sector’s first Europe-wide survey was a core task and part of our charter. Our research has allowed us to establish an effective baseline in terms of current attitudes, policies and challenges to diversity and inclusion in our sector. This has in turn given us firm foundations on which to build actions and programmes to work towards genuine and sustainable progress. This includes training and practical guidance for members, our awards and more cross-cutting work such as streaming reform which we also address in this report with the insight of Ben Wynter.”

Ben Wynter, AIM Entrepreneur and Outreach Manager, co-founder of POWER UP and founder of Unstoppable Music Group, commenting on the question of equity in streaming reform: “For people from a low socioeconomic background and particularly people of colour, streaming has been a game changer. Whilst there is no doubt that streaming reform would benefit many, my concern is that in any reform there will always be a loser. The majority of solutions that I have seen would have a detrimental impact on those from low socioeconomic backgrounds as income would be repurposed from their share elsewhere, threatening to dismantle the democratisation that exists. This is why I find it hard to support solutions such as “equitable remuneration”. When searching for a solution, it is important to take into account the wider impact on ALL creatives that changes to streaming would have.”

Eva Karman Reinhold, Chair of SOM, (Sweden), Co-chair of IMPALA’s equity, diversity and inclusion task force continued: “One of the highlights this year was our two new awards. It was one of our charter’s commitments. I’m really happy we launched our Changemaker Award. Real change takes time, also in the music industry, and this is not a one-off. We’re still working on equity, diversity and inclusion with IMPALA’s task force and this award will take place yearly. POWER UP won the first award and is a great initiative. We also highlight other projects by launching a new changemakers webpage. Our new collaboration with YouTube on the 100 Artists to Watch programme is also a great way to promote change in our sector in a concrete and practical way.”

Ben Wynter, AIM Entrepreneur and Outreach Manager, co-founder of POWER UP and founder of Unstoppable Music Group, commenting on winning IMPALA’s Changemaker award: “POWER UP was created to move the needle on anti-black behaviour within the music industry and to facilitate better dialogue for those companies who posted black squares, wanted to do better but didn’t know how. Year one has proved an overwhelming success. We have received almost 1,000 applications and £10 million in support has been requested. It is impossible to deny the need for a fairer and more equitable music industry as has been demonstrated by the demand from those hitting glass ceilings. Awards such as these are always bittersweet, as we would all like to work in an industry where an award like this would not need to exist.”

Helen Smith, IMPALA’s Executive Chair concluded: “Our survey was a huge job for IMPALA and it’s a real achievement to have carried out the first mapping of the independent sector across Europe. The results are a revealing snapshot of what our members are currently doing. We encourage all of our members to take action, join our free training programme and participate in our award schemes. Hearing from POWER UP how our Changemaker award helped, is a real endorsement of why it was important to introduce a new award. This report is a picture of where we are today and moving forward it’s great to see more members joining our task force to help guide our future priorities.” 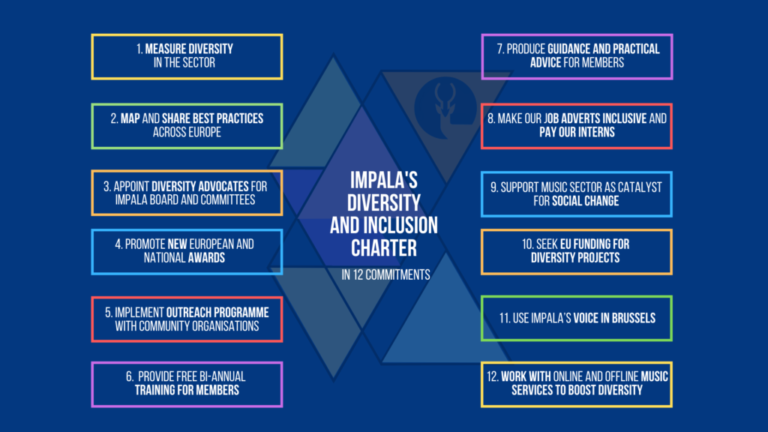 About IMPALA
IMPALA was established in 2000 and now represents nearly 6000 independent music companies. 99% of Europe’s music companies are small, micro and medium businesses and self-releasing artists. Known as the independents, they are world leaders in terms of innovation and discovering new music and artists – they produce more than 80% of all new releases and account for 80% of the sector’s jobs. IMPALA’s mission is to grow the independent music sector sustainably, return more value to artists, promote diversity and entrepreneurship, improve political access, inspire change, and increase access to finance. IMPALA works on a range of key issues for its members, runs various award schemes and has a programme aimed at businesses who want to develop a strategic relationship with the independent sector – Friends of IMPALA.